Exodus 21: 22-23
“If men struggle with each other and strike a woman with child so that she has a miscarriage, yet there is no further injury, he shall surely be fined as the woman’s husband may demand of him; and he shall pay as the judges decide.  But if there is any further injury, then you shall appoint as a penalty life for life.” 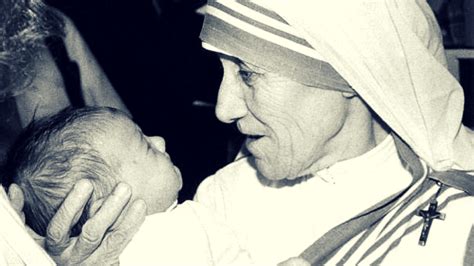 I feel that the greatest destroyer of peace today is abortion, because it is a war against the child – a direct killing of the innocent child – murder by the mother herself.  And if we accept that a mother can kill even her own child, how can we tell other people not to kill one another?  How do we persuade a woman not to have an abortion?  As always, we must persuade her with love, and we remind ourselves that love means to be willing to give until it hurts.  Jesus gave even his Life to love us. So the mother who is thinking of abortion, should be helped to love -that is, to give until it hurts her plans, or her free time, to respect the life of her child.  The father of that child, whoever he is, must also give until it hurts.  By abortion, the mother does not learn to love, but kills even her own child to solve her problems.  And by abortion, the father is told that he does not have to take any responsibility at all for the child he has brought into the world. That father is likely to put other women into the same trouble.  So abortion just leads to more abortion.  Any country that accepts abortion is not teaching the people to love, but to use any violence to get what they want.  That is why the greatest destroyer of love and peace is abortion.

IF HUMANITY DOESN’T START AT CONCEPTION. THEN WHEN DOES IT?  JR